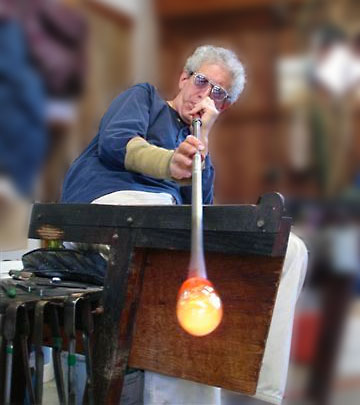 I was originally attracted to hot glass because of its liquid qualities and sense of immediacy. I have always tried to capture an element of the elegance, fluidity, and whimsy which I feel are inherent properties of glass. I have often formulated my own glass, including the colors I use, and have generally used opaque glasses or frosted surfaces, which tend to emphasize the overall form of each piece. I find that various aspects of my work take on much more personal connotations for me, although rarely in any explicit ways. This usually happens without my conscious knowledge; I may be looking at a completed piece and see something new in it -- something about myself or my work. This kind of dialogue with the work has become very important to me. I view many of the pieces I've done as extensions of this dialogue, and as an analogy for my attempt to integrate the various facets of my life -- the fusing of various parts, somewhat off-balance, but hopefully integrated into some sort of harmony. The glass itself can be a symbol of human characteristics: fragile, but durable; fluid, but hard-edged. This all has something to do with the possibilities for change and transformation, both with the material and with the person doing the creating. I think of my work as an act of communication, not only with myself, but with the viewer as well. Perhaps what is communicated is more of an attitude than a specific idea.

In the last few years I have been working in several different, but parallel directions:

Blown Glass: I have been creating a series of Frosted Vessels which convey the sense of gesture which I feel is so inherent in hot glass. Some of the things I make are concerned with seeing the world in a different light. In an age of electronic media, when we are being bombarded by images and being asked to accept them as reality, it seems important for artists to present alternatives to accepted ways of seeing. Juxtaposing familiar images to create new ones, or presenting familiar objects in a different context are two approaches to this. They are also basic ingredients in humor, and I hope that the enjoyment I have with my work can carry over to the viewer.

The Cup/Goblet seems to be an image to which I keep returning. The variations are endless, and the relationships among vessel, handle, and base provide a constantly changing format to play with. Over the years the Goblet has moved into a more sculptural context, melding "function" with more intuitive feelings. My work, whether more "sculptural" or "functional" in intent, has maintained a certain continuity in terms of style. The approaches I use are eclectic and personal at the same time -- sort of a blend of Late Venetian and Early Neurotic.

Mixed-Media Sculpture: I have been working on a series of pieces that have marked a departure from my other studio glass work. These began by using glass, wood, and other materials in a very basic, visceral way. I have always felt that materials carry their own metaphors, or a resonance to a more emotional level, and have used this as a point of departure. Often the work has begun by following a fairly intuitive path dictated by the materials or by a sense of form or gesture. Inevitably however, I see other themes emerging. With "Implement", for example, I worked on a balance of form & materials; as I worked, it slowly appeared as some sort of primitive tool. It was as if I were unearthing the meaning hidden within the piece. So there was a sense of having a dialogue with the work, of learning about some hidden aspects of my own sensibilities by having made a tangible object. For me, this dialogue is an important aspect of the exploration involved with the work. Many of the pieces have involved an exploration of pressure and constraint (perhaps a metaphor for how we place limits around our own experiences).

In working on these sculptures, I've created problems for myself to solve; hopefully, the pieces offer solutions to problems while at the same time raising more questions. I want them to be ambiguous and evocative at the same time.